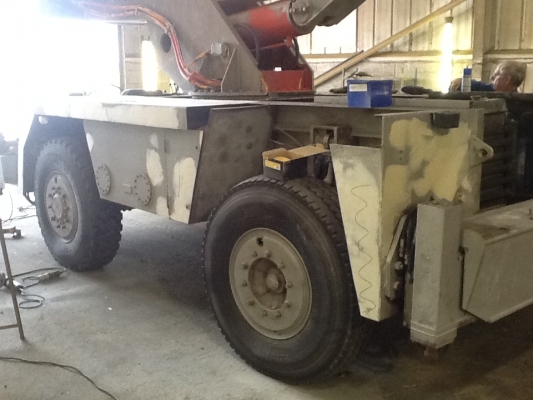 Mammoet contracted Crowland Cranes to carry out the refurbishment of a 1989 Jones IF15A. Crowland Cranes are one of the few companies operating in the UK today capable of completing a refurbishment in a true ‘one stop’ option. Mammoet recognised that this style of crane is unable to be replaced with anything else currently available in the market today. During the refurbishment Crowland Cranes remained in contact with Mammoet and numerous tasks were completed, including power train repairs to engine and transmission, steering, brakes, various oil leaks which typically develop over time on a crane of this age. The slew box was overhauled; general hydraulic, pneumatic and electrical systems were replaced and generally tidied up. New decking panels, new operator cab, chassis shot blast and full repaint including vinyl livery. The refurbishment was completed within quoted time scales and within expected budget. The crane was very well received at the recent Vertikal Days exhibition with very positive comments about the refurbishment; some were convinced that we were promoting a new replacement! The general acknowledgement being that if completed correctly there is still a strong market for refreshing/refurbishing cranes, especially in today’s financial climate.