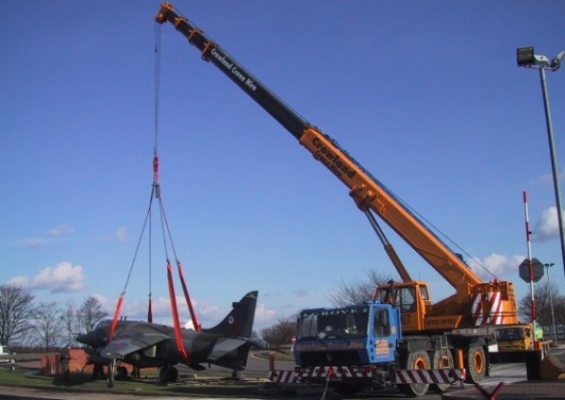 A ROYAL Air Force serviceman has spoken of his surprise at seeing a familiar sight from south Lincolnshire some 8,000 miles away in the Falkland Islands. Sgt Paul Chapman got in touch with the Spalding Guardian when he spotted a machine belonging to Crowland Cranes working at the Mount Pleasant Complex (MPC), the main operating base on the island. Sgt Chapman, who is from Holbeach and serving on a four-month detachment in the Falklands, said: “I was extremely surprised when contractors at MPC started to dismantle the three water storage towers that have formed part of the unmistakable skyline of the facility since it was built. “The reason I was surprised was the large mobile crane that was employed to assist in hoisting the now redundant sections of the water holding tank back down to the ground was from Crowland Cranes.” Crowland Cranes’ managing director Pete Issitt confirmed it was a 50-tonne capacity all-terrain crane from the firm’s rental fleet. He said: “It was delivered to RAF Brize Norton by Crowland in September. From there it was internally transported to the Falklands. “The crane assisting with various lifting tasks associated with the oil exploration industry which is taking place over there. “Our lifting equipment company TMC Lifting Supplies has also been heavily involved with supplying either direct or via Brize Norton most types of lifting tackle for the projects in the Falklands, again predominantly oil industry based.” He said travellers making their way across the world will stumble across the firm from time to time. Mr Issitt said it has engineering works being completed in Egypt, West Africa and most recently Sierra Leone, while Crowland Cranes is also European dealers for one of China’s largest crane manufacturers, Zoomlion. He said this has resulted in Crowland Cranes being contracted to support 46 European countries with technical support and spare parts. Read the original article on Spalding Today here.