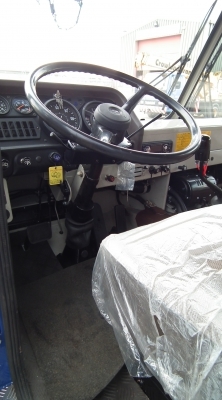 Crowland Cranes service department have recently completed the major refurbishment / rebuild to a fire damaged Kato NK350Ev, the crane was badly vandalised whilst on a site in the north of the UK, which resulted in a completely gutted / distorted chassis cab. As insurance approved repairers Crowland Cranes were called to recover the crane and subsequently complete the repair. The cab was totally rebuilt in-house at Crowland including panel work and interior, in addition a new wiring loom was also manufactured and installed at Crowland. The crane was re-instated back to original manufacturer’s specification, clearly demonstrating how Crowland Cranes divisions work together including field service, workshops, transport and paint shop proving a true ‘One Stop’ package.